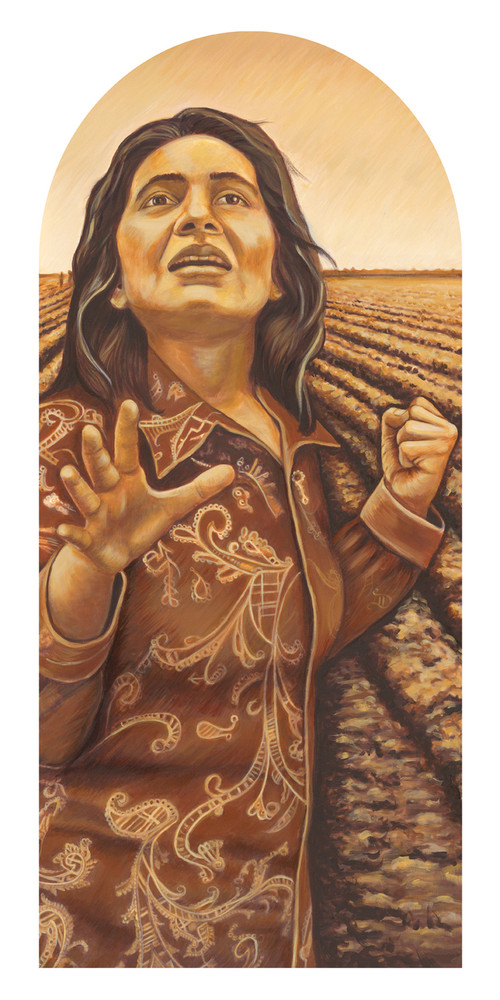 Portrait of Dolores by Judy Baca

One of five painted portraits for the Cesar E. Chavez monument at San Jose State University.

The monument at San Jose State University in San Jose California was designed by Judith F. Baca and the UCLA/SPARC Cesar Chavez Digital Mural Lab. The monument commemorates Chavez through his ideals and beliefs, carried out in his actions to improve the conditions of the campesino, which inspired so many to join his efforts to achieve social justice. A key element to the monument is to teach the next generation how to choose to live a life in the center of your values and beliefs as Cesar Chavez did.

In the interior of the arch, the central mural depicts a contemplative Chavez as a farm worker leader and organizer looking over the California fields where the historic grape strike took place, with the farm workers represented metaphorically as twisted vines. Above in a cloud, Robert F. Kennedy joins Chavez as he breaks a 25-day fast accompanied by his wife Helen and his mother Juana. The image highlights fasting as a cornerstone to his philosophy of non-violence. La Virgen de Guadalupe, the indigenous patron saint of Mexico and the revered symbol of the farm workers, blesses the struggle with roses. Lurking in the sky, a calaca (skeleton) represents the ever present need for vigilance, to ensure decent conditions for the workers and reminds us that the struggle is not over in the fields.

In keeping with his humility, the exterior of the arch depicts not Chavez, but two campesinos bent over in the fields of California. One of Chavez’s most important achievements was the abolishment of the short hoe, which was responsible for many injuries to workers.

The opposite side of the arch includes two important personages to the movement: Dolores Huerta, co-founder of the United Farm Workers and Chavez’s partner in the movement’s endeavors, with one hand evoking her powers to persuade growers to amend the unjust treatment of the farm workers, and with the other hand representing the power of non-violent actions through marches and boycotts. Mahatma Gandhi is also depicted in the fields to honor him as Chavez’s inspiration for the real possibility of social change through non-violence and spiritual practice.

“It is my hope that this arch will offer an introspective and meditative space for viewers to receive its message. May all those passing through it experience the passage from hope and inspiration to education and, finally, to action for social and environmental justice.”

In 1986, our migrant family moved to the small agricultural town of Guadalupe, CA. I was 5 and stepping into creative consciousness fast. Glimpses of the “outside world” came by way of bookmobiles and traveling artists. It showed me that art, too, was migrant.

In 1990, Judy Baca’s Guadalupe Mural Project was completed. Four 8ft x 7ft panels along the corridors of our city hall reflecting faces and stories my community and I were familiar with. City hall was the place we gathered for everything from basketball games to quinceñeras. As I grew older, I found myself in front of those 4 panels more and more, beginning to understand my town's history and it's people.

I would later participate in creating community murals in Guadalupe, leaving my own mark in my beloved town. I quickly learned that if I wanted to thrive as an artist, I had to travel to learn more about my place in the world. I went to design school in San Francisco and began my professional career in Oakland.

Judy's Guadalupe Murals had an objective to provide the residents of Guadalupe hope for a better future. I am walking proof of her success in doing just that.

Today, I have the privilege to stand beside Judy Baca as a creative working professional. She unknowingly was the inspiration for me to pursue art as a career and lifelong passion. I consider her a mentor and a comrade in my navigation through art, community engagement, and beyond. - Lexx Valdez