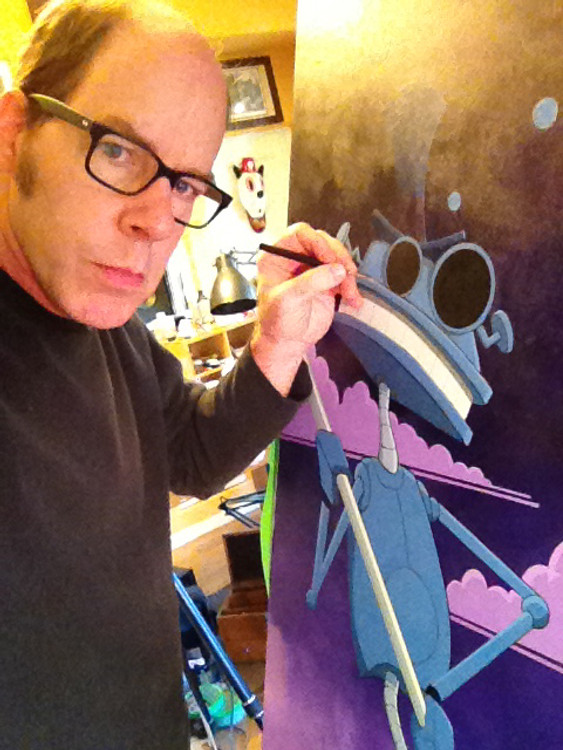 Dave Pressler is a creative force to be reckoned with. A skilled multimedia artist, illustrator, animator, painter, sculptor, character designer, the list goes on and on. While his talent is undeniable, it is his humor and spirit of adventure that has cultivated his relationships with viewers and amassed a large and loyal fan base. Robots, monsters and pop culture are the cornerstone of his artistic canon, but more than his subject matter, Dave’s ability to find the fun and humanity in his subjects is tantamount to why people love what he does.

His work spans from the screen to the canvas, splitting his time amongst creative endeavors from the tangible to the digital. In the past 25 years, he has developed and designed characters and worlds for many major companies, co-creating the Emmy nominated animated show “Robot And Monster” for Nickelodeon, “Boss Baby Back In Business” for Dreamworks TV,, and is currently the co-executive producer on “The Rugrats” reboot for Nickelodeon. In this position, he oversees the art direction and look of the entire show, drawing on his impressive attention to detail and once again his dedication to the fun and funny.

In addition to his media projects, Pressler is an accomplished painter and sculptor whose work shows in galleries all around the world. Dave’s career retrospective, “Idea to Object”, was shown at the Lancaster Museum of Art & History in 2018; it was a glimpse into the mind of the creator, a peek behind the curtain of an artist's life that revealed that art is just technique and hours of hard work, attainable for anyone who wants to try.

Continuing his journey through artistic mediums, Dave has also taken his kids' media work literary. In a natural extension of his production work in children’s entertainment, Dave made the leap to illustration as well. Back to School With Bigfoot (Scholastic - Arthur Levine) written by Samantha Berger and Martha Brockenbrough was released in 2016, and in 2020 the team released Bigfoot Wants a Little Brother, the next in the Bigfoot series.

Dave’s spirit of exploration and adventure is more than just Earthbound. In one small step for man, one giant leap for artist-kind, he intends to be the first animator in space. As one of the few pass holders to travel to space with Virgin Galactic, Dave Pressler is ready to take flight whenever they get the spaceship ready.

As we look to the future of art, there is a new frontier, the world of NFTs. And just as he has approached every other endeavor with skill and determination, exclusively digital art is next. Keep an eye out for the first Dave Pressler NFTs, expected to hit the blockchain soon.