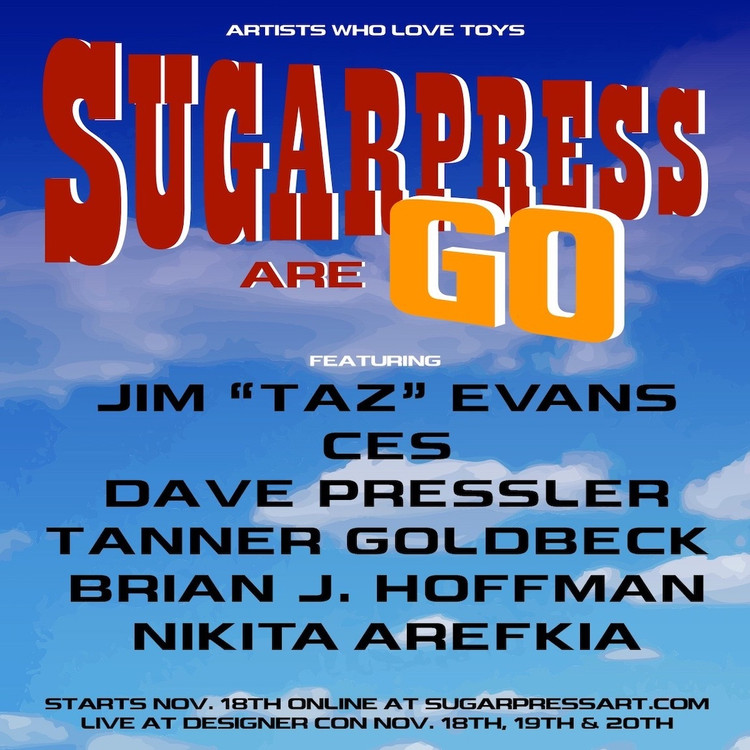 SUGARPRESS ARE GO, ARTISTS WHO LOVE TOYS taps into popular culture and our collective unconscious to make a connection with the viewer, placing them in a moment compelling to the artist and enlightening for our time and viewer.

Toys have been used in and as art for centuries.  Leonard Da Vinci’s lion robot, the toys we find today in archeological digs, toys represented with children in portraiture, are a few.  Chess sets, as far as back as the 6th century are considered art, then Calder invented mobiles to make his work playful, and more recently Koons has supersized toys, making them art.

In our time, the merging of collectable toys and art was brought into mainstream and mastery by Murakami’s joyous, color filled work, which transcends the page, wall and object, touching something eager and happy in the mass collective unconscious.  Murakami was perfectly timed as he taped into the new social media phenomenon sweeping the earth with an entirely new “smily face.”
Jim “TAZ” Evans
CES
Dave Pressler
Tanner Goldbeck
Brian J. Hoffman
Nikita Arefkia