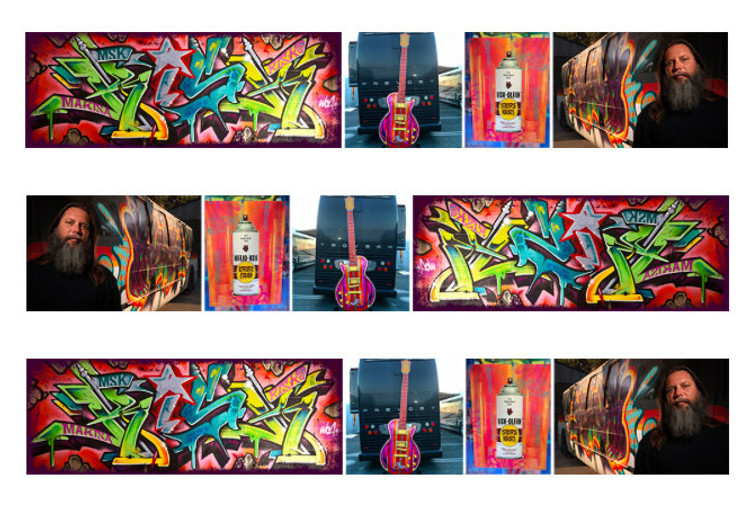 Kelly Graval, the multi-talented Fine Artist, Illustrator, and Graffiti artist known as RISK, has been synonymous with the Los Angeles art community for decades. With a career spanning 30 years, RISK has solidified his place in the history books as a world-renowned graffiti legend. He has come a long way since he pioneered the painting of freeway overpasses, signs and billboards, dubbed “heavens.” Although RISK loves aerosol art, he sees it as merely just one genre in his life’s work. From his days as a student at the USC School of Fine Arts to Gallery and museum showings around the world; RISK has transformed from a street artist to a rising star in the contemporary art world.

Looking back on his pioneering work with the West Coast Artists crew to his now legendary multi-faceted approach to creativity; RISK art spans the spectrum of everything from renowned clothing brands and canvas pieces, to massive street murals that breathe life into their communities. As his notoriety became prevalent around the Los Angeles art community; it didn’t take long for RISK to become a hot commodity in the music scene. His art can be scene in music videos by everyone from the Red Hot Chili Peppers and Ice Cube to Bad Religion and the legendary Michael Jackson. RISK has also worked with some of the most notable music festivals, musicians, and events around the globe including Coachella, the MTV Music Awards, Sunset Strip Music Festival, The Doors and of course his high profile collaboration with Aerosmith.

The next step was to take the graffiti from the streets and into the gallery. RISK accomplished this with the launch of the Third Rail series of art shows. These very successful events showcased his versatility with various mediums and styles from lettering to imagery. Consciously pushing the boundaries for graffiti as an art form, RISK pushed graffiti into a form of artistic expression that is universally recognized around the globe.

From there, the entrepreneurial spirit and the desire to push creative concepts gave birth to the first authentic line of graffiti-inspired clothing, which RISK branded as THRID RAIL. With his artwork used as the designs for apparel, RISK’s art quickly became the key ingredient for one of the hottest clothing brands to emerge out of Southern California.

Today, RISK stays connected to his roots by supporting artists and giving back to the community with countless charitable endeavors. He continues to travel the globe showcasing his art, and generating media attention from the likes of The Los Angeles Times, countless magazines, NBC, Carson Daily, BBC, and many others. The mark that RISK has left on graffiti culture will be showcased in his upcoming Biography " KEEP ON KEEPIN ON ". Risk continues to break down barriers in both art and commerce while remaining grounded and respectful of the culture he helped build.