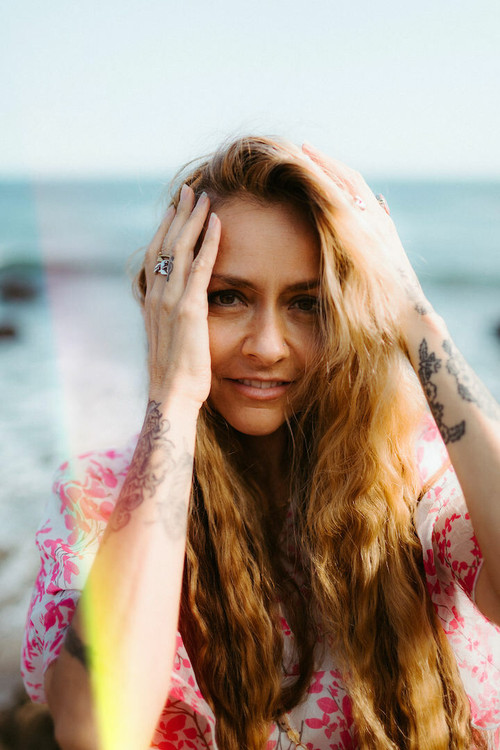 Rising from the Parisian catacombs, multifaceted artist Chloe Trujillo grew up in the fashion world immersed in a true creative artistic energy. Chloe’s parents were fashion designers for their own women's "pret-a-porter" line "Claude Barthelemy." Her grandfather was a touring Opera singer. Their place was a constant gathering of artists and personalities from all over the world.

She balances her time between art, music and fashion, infusing each piece and project with the love and excitement she feels whilst creating. But Chloe considers herself an artist first! She creates her complex, layered, deeply saturated artwork with joy and spontaneity. By allowing the text, symbols, colors and composition to flow through her and onto the canvas, she releases herself from preconceived notions and taps into pure creativity. Inspired by the vast range of human experience along with a deep connection to the spiritual realm, Chloe connects with her audience through the beauty of her visions, the intensity of her soulful emotions and sincerity of her intention. She knows that creating something with passion and purpose infuses it with that energy.

Her work has garnered international acclaim in locales such as Paris, Los Angeles, New York City, London, Vancouver, Berlin, San Francisco, and Malibu. Her “Aztec De La Chloe” was on display at The Metropolitan Museum of Art in New York and is now on display at the Rock Roll Hall of Fame. Her most recent collections received notice in Vogue Italia, Vanity Fair, Rolling Stone, and the New York Times.

Chloe’s latest and fourth studio album “Mothers of a New Nation” came out in October 2021. She and Rav Medic signed a record deal with Golden Robot Records for their collaborative music project.

Chloe and her family reside in Los Angeles, they continue the creative family tradition by keeping the music always playing.